How to survive a Philly Night Market

How to survive a Philly Night Market

The night market arrives without warning.  Well, there’s a website, but foodie foreknowledge in no way diminishes the effect.  A few blocks away from south street, the flow of people starts to thicken.  They have loose smiles, shiny eyes, and their breathing accelerates as they reach the controlled sprawl of tents and trucks.  The air is thick with anticipation.  It’s time to do what Philly does best: Eat and drink.

The night market is a vast cavalcade of over 80 vendors, from trucks, to restaurants, to clay studios and firefighters.  What started as an informal way for those in the know to enjoy the food trucks they follow on twitter, has transformed into something more, there’s almost a burning man feeling of freedom here, if burning man induced in its participants, a fervent desire to eat everything in sight. 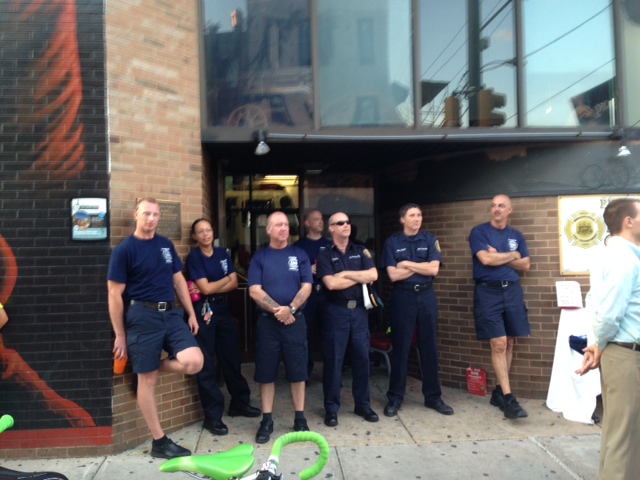 And its the participants that make this event.  There’s a teeming organic vibrancy that is at the heart of Philadelphia’s best, most innovative, and warmest community-its restaurants.  If the archetype of burning man is the bohemian adventurer, the archetype Philadelphia foodie is an anti tourist, or a tourist of her own hometown, who bubbles up from her office cubicle where she deftly slings yelp reviews, and explores everything the city has to offer.  There’s a gregariousness that’s infectious here, but there’s also a voracious opportunism.  In short, a blossoming lotus flower of the free market.

I appreciate all of this and none of this, as I chomp down on  corn with red miso butter, nori, bonito, and scallions from McCrossen’s Tavern. 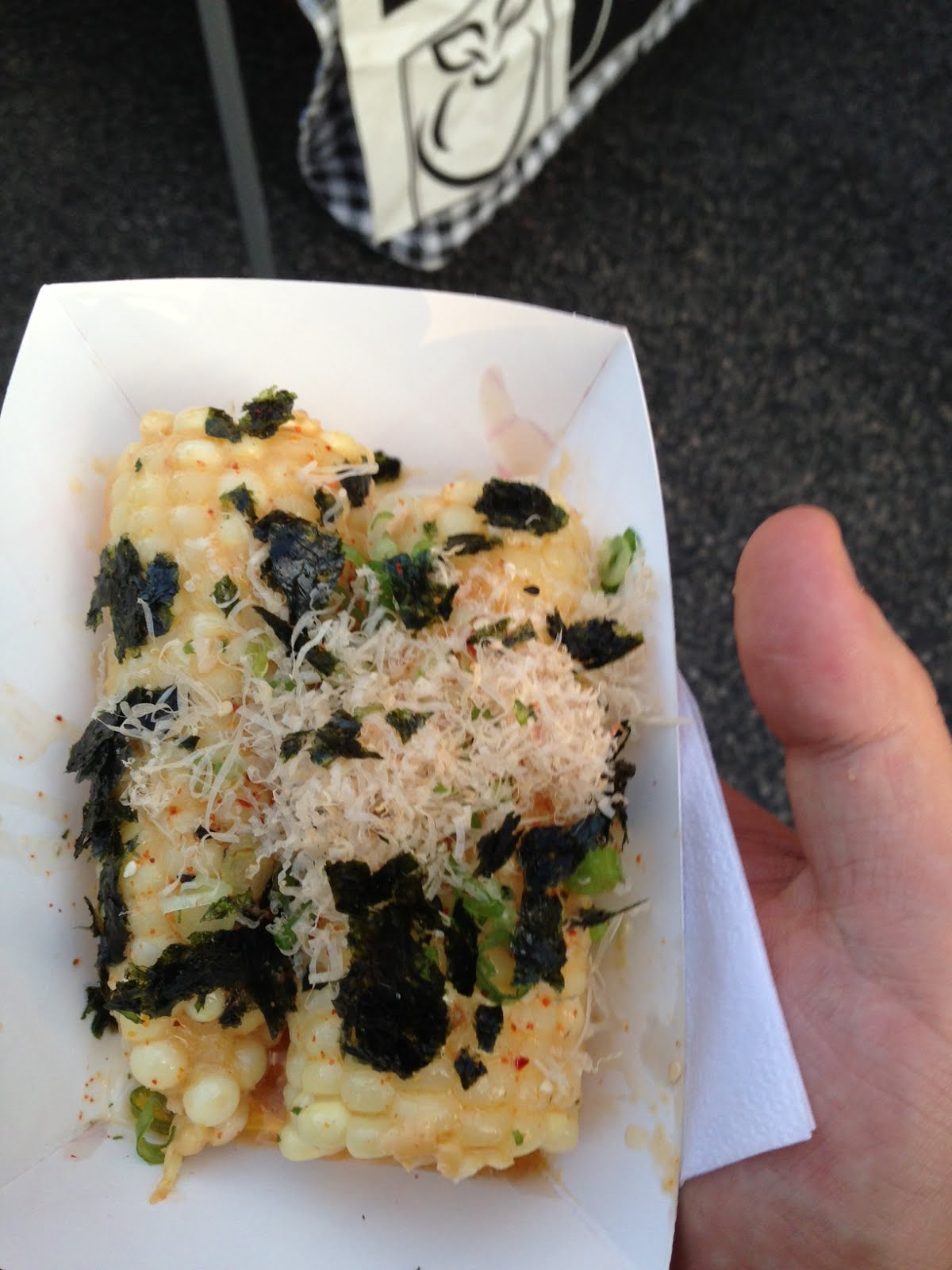 The nightmarket will eat you up and spit you out if you’re not ready for it.  Here’s how to survive:

1) Come EARLY-  Although the nightmarket officially opens at 6pm,  you should come a little earlier, at 5:30.  This will allow you some time to look around as all the vendors are setting up, meet some people who are really dedicated to their craft, and avoid the lines.  The lines, and the inevitable running out of food, are by far the worst pitfalls of the nightmarket.  Avoid both by coming early and feeling like you’ve gone to six flags on an overcast Monday morning. 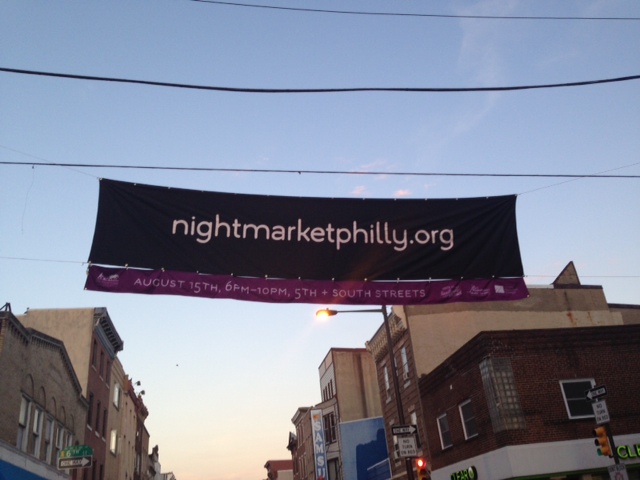 (Twilight Time is already too late)

For a detailed writeup of the next philly night market.  As the date approaches, a list of vendors will also be posted.  If you or your band of adventurers have gluten free/vegan/paleo leanings, plan to visit those vendors first before you go off exploring.  Choice transforms the stomach into prime real estate, and also presents the opportunity for buyers remorse.

There’s a rhythm.  Come early and nosh on everything, take care of your dietary needs and those of your friends.  As the hungry masses descend, it’s time to

3) Meet one cool vendor.  Don’t try to take it all in.  It’s too much.  Instead, focus on meeting one person or company, that’s really passionate about what they do, and find out about them.

This was tough for me.  There was so much.  This is a drinking blog but it was overwhelming.  Philadelphia Distilling was out in force with a Bloody Mary with The Bay Vodka, coming in in refillable 20 oz. tumblers.  There were also watermelon margaritas, ginger lemon vodka drinks, but then I saw a friendly face, Sam who represents the Frecon Farms Cidery: 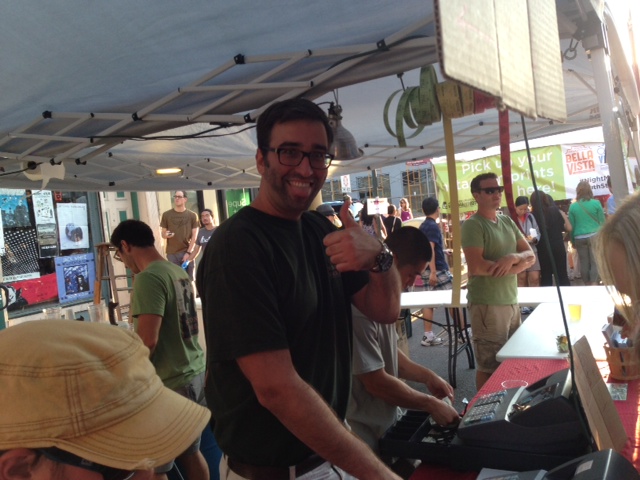 I got a chance to talk to Jamie Bock of Frecon Farms, and it’s an exciting Cidery that’s experiencing tremendous growth.  Cider is finally being accepted, as it is in England, to be the artisanal nuanced product it truly is.  Apples have twice the DNA of humans, which is why even ACME will have a large variety.

All the apples used in the cider are grown on premisis, and they even use apple blossom honey, gathered from bees nearby, which layers the flavors in the most rustic way possible.  Crabby Granny, my favorite, uses the highest percentage of Granny Smith apples.  The cidery is experimenting with single varietal apples, and they’ve been growing their hops for the past 4 years, and will start to incorporate them soon.

Also on tap was the early man cicer, made from the Gravenstein apples, an ancient varietal brought over from Germany, and the female favorite, the hogshead, aged in new charred oak. 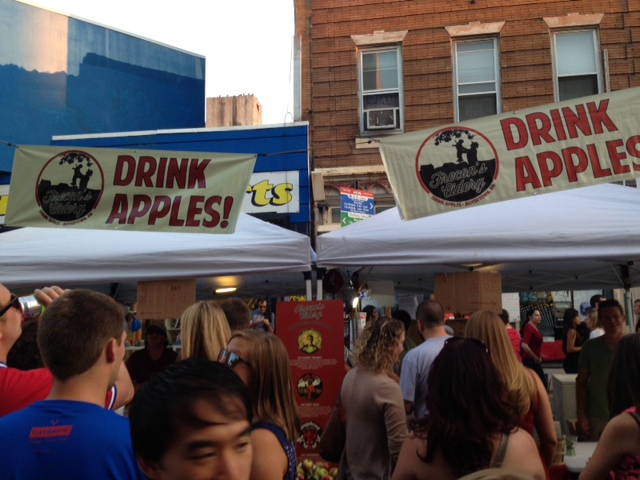 I hope to see you all at the next night market in Chinatown in October!

Fill Out Form For More Information!

We will not sell or distribute your info.